September Fifa Ranking: Nigeria Drops from 38 to 44, Moves up to 5th in Africa

Despite losing just one of the four matches played within the last 30 days, Nigeria has dropped by 6 places from 38 in the whole world to 44 in the latest football ranking. This according to football analyst is a bunch of disappointment despite defeating Benin Republic by 2 – 0 in the CHAN qualifier, after losing to the same team away by one goal through a penalty converted by the Squirrels in the 90th minute of the game in Cotonou. In the same period, Nigeria also defeated the reigning African champion – Cameroun by 4 – 0 in Nigeria before playing 1 – 1 away in Yaounde.

Nigeria however moved to 5th place in Africa from 6th in last edition, coming behind Egypt (30), Tunisia (31), Senegal (33), and DR Congo (42) respectively. Shocking enough, Brazil relinquished its first position in August to the World Champion, Germany who now occupy the 1st position, closely followed by Brazil (2), Portugal (3), Argentina (4), Belgium (5), Poland (6), Switzerland (7), France (8), Chile (9), and Colombia (10) in the first ten respectively. All the ten teams in the first ten position fell within the bracket despite changing positions when compared with August rating. For instance Colombia dropped to 10th position while france moved up to 8th position – swapping positions in last month’s ranking. 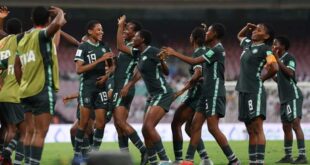