This is the kind of stories I hate to report because it settles so much on emotions. The celebrities involved are colleagues and friends but God not only knows best, He has a purpose for everything especially if the Holy Books are anything to go by.

The Holy Quran 3:145 says “And no person can ever die except by Allah’s Leave and at an appointed term.” In the same vein The Quran 62:8 says “Verily, the death from which you flee will surely meet you, then you will be sent back to Allah, the All-Knower of the unseen and the seen, and He will tell you what you used to do.” The Bible also states in the book of Isaiah 57:1-2 that “The righteous man perishes, and no one lays it to heart; devout men are taken away, while no one understands. For the righteous man is taken away from calamity; he enters into peace; they rest in their beds that walk in their uprightness.”

The first on the list is Nollywood actress and evangelist, Eucheria Anunobi. She has paid her dues in the entertainment industry and that veracity is unquestionable. The entertainment industry was thrown into grieve when the news of the demise of her only son, 15-year-old Raymond Ekwu filtered in. The promising lad died from complications resulting from his long time battle with sickle cell anaemia at early hours of early hours of Tuesday, August 22nd 2017. In a statement credited to the mother of the deceased, like a true believer she said “Thank you, I appreciate it. My son has gone to our place of origin (heaven) to be with our daddy Jesus, waiting for me when I eventually go there at the fullest of time.” Very touching!

The second is a famous newscaster with Daar Communication Plc, a highly revered on air personality – Lara Owoeye Wise. June 30th 2012 was actually the day; reports had it that Timi, a very promising 13-year old Nigerian gave up the ghost after a brief illness while in school. High Chief Raymond Dokpesi was highly emotional when he heard about the death but can we question God?

Just as the staffs of Africa Independent Television and Raypower were trying to get over the sudden death of brilliant Timi, tragedy struck again. A famous sports personality with the same television station, Aisha Falode lost Toba, a 19-year old boy and of course promising musician. Not again!! Everybody muttered. This happened far away in Dubai on the 15th of February 2014. The cause of his death became controversial as it was first reported that Toba died from injuries sustained from a car crash. Later the truth was let exhumed; he was killed by an Arab citizen who threw him from a sky-rise building in United Arab Emirate. In a statement by the then Nigerian Football Federation President – Aminu Maigari, ‘This is a tragedy. It is very, very sad to hear of the death of such a young, charming and ambitious young man’. Aisha Falode has since moved on, though justice is yet to be received.

I pray fervently that whoever reads this story shall not witness unexpected death of his/her “germinating fruits” as well as loved ones; at the same time, the three celebrities mentioned here shall continue to have peace with the Almighty Creator as He alone is the comforter. ONN commiserates with you. 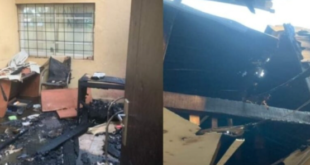