COAS SOLICITS SUPPORT OF TRADITIONAL INSTITUTION FOR A PEACEFUL NATION

The Chief of Army staff (COAS) Lieutenant General Faruk Yahaya has called on Royal fathers of the traditional institution across the country to support the military and other security agencies with their reverred influence in their various kingdoms and domains. 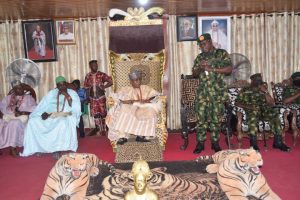 The COAS made the entreaty while on a courtesy visit to the palace of His Imperial Majesty, Oba Aladetoyinbo, Ogunlade Aladelusi Odundu the second, The Deji and paramount ruler of Akure Kingdom. The COAS also stated that he was on a working tour of 2 Division area of responsibility and found it necessary to pay obeisance to the traditional institution. He noted that the continuous support of the royal fathers is critical to troops’ operational success.

General Faruk Yahaya lauded the peaceful coexistence and cordial relationship existing between the Nigerian Army and the people of Akure and encouraged its sustenance.

The Nigerian Army, he reiterated will continue to work tirelessly with other security agencies not only in Ondo state, but the entire country.

Addressing officers and soldiers of 32 Artillery Brigade, the COAS stated that the visit was aimed at familiarizing with the personnel and obtaining first hand information on their welfare and challenges. He charged them to exhibit gallantry in the fight against banditry, insurgency and other sundry crimes. He urged troops to be committed, dedicated and professional during operations, reiterating the need to remain responsive and work as a team to maximize operational gains. He admonished the troops to remain loyal to the constitution of the Federal Republic of Nigeria and the President, Commander-In-Chief.

The COAS assured the troops that their welfare is paramount to the NA. He. however, reiterated the zero tolerance posture of his command to acts of indiscipline.

General Yahaya also paid a courtesy visit to the Executive Governor of Ondo, Arakurin Oluwarotimi Akeredolu (SAN) at the Governor’s office where he assured of the commitment of the Nigerian Army to the sustenance of peace and tranquility. The Governor was represented by the Deputy Governor, Hon Lucky Aiyedatiwa.

Bandits Kill One, Abduct 15 Others In Niger State