Notable leaders from the Southeast geopolitical zones this Friday met with President Muhammadu Buhari at the grey room, by the President’s office, Presidential Villa, Abuja.
The delegation was led by the Nonagenarian, Honourable Mbazulike Amaechi and had in attendance a former governor of Anambra State, Dr. Chukwuemeka Ezeife, the Co-Chair, Interfaith Dialogue Forum for Peace, Bishop Sunday Onuoha,  Tagbo Amaechi, and Chief Barr. Goddy Uwazurike.
Also present were the Minister of Labour and Employment, Senator Chris Ngige, the Minister of Science, Technology and Innovation, Dr. Ogbonnaya Onu, the Minister of Foreign Affairs, Mr. Geoffrey Onyeama and Minister of State for Education, Chukwuemeka Nwajuiba. 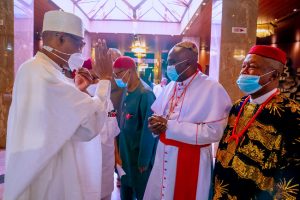 The Chief of Staff to the President, Professor. Ibrahim Gambari, the National Security Adviser, NSA Major. General. Babagana Monguno (retd,) were also present at the audience with the President.The agenda of the meeting was not made public as the delegation did not speak to the press after the parley. However, it may not be unconnected with the security situation in the Southeast and the arrest, detention, and prosecution of the leader of the Indigenous people of Biafra, IPOB, Nnamdi Kanu. It will be recalled that the Attorney General of the Federation, AGF, and Minister of Justice, Abubakar Malami recently said that exploring political solutions in the IPOB and Nnamdi Kanu issue was not foreclosed.The leadership of Ohaneze Ndigbo, the former Deputy President of the Senate, Dr. Ike Ekweremadu, southeast monarchs, and the religious leaders from the zone were among those that have canvased for a political solution in the IPOB imbroglio.

Spread the love ...let others enjoy this story
Share
Previous ‘Hundreds’ Of Fake Lebanese Degrees Sold To Iraqis
Next Stray Bullets Hit Civilians As Military Push Back Terrorists In Borno