Less than a year to its establishment, Confluence University of Science and Technology (CUSTECH), Osara has matriculated its pioneer students numbering two hundred and forty six.

Conceived and actualized by Governor Yahaya Bello’s administration, CUSTECH, the second state- owned university after the Prince Abubakar Audu University, Anyigba established about two decades ago, is envisioned strategically to build the technological and scientific human resource of the state.

At the matriculation ceremony held Thursday at the campus of the institution in Osara, Adavi Local Government Area of Kogi State, Governor Yahaya Bello, obviously elated with the pace of development in the university described it as a ” dream come true”. 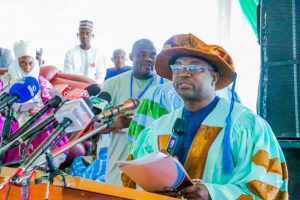 He revealed that the idea of the University was inspired by the need to end the travails of Kogi citizens unsuccessful search for admission into sciences, technology and medical programmes in universities across the country.

According to Governor Bello, leadership exist to find solutions to problems, noting that this has been the driving force of his administration’s approach to the challenges and development needs of the state, and declared that CUSTECH is one of the proofs of his commitment to solving problems in the state.

While eulogising Professor Mohammed S. Audu and his team for helping  develop the plan and vision of the university as well as the pioneer management and staff for writing their names on the sand of time, Governor Bello charged the students to make maximum use of the opportunity to study at the citadel of learning.

In his address, Vice Chancellor of the University, Professor Salawu Sadiku, said the establishment of CUSTECH represents a milestone in the present administration’s resolve to widen the spectrum of opportunities for the younger generation to meet the challenges of the future as well as achieving self- actualization. 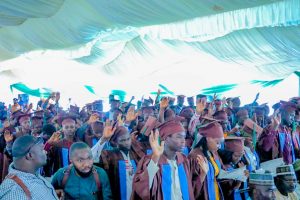 In addition to two faculties and eleven programmes in the sciences and information technology it already offers, the university, Professor Sadiku disclosed, is commencing engineering Programmes in the next academic session, saying this is intended to take full advantage of the technical environment CUSTECH is domiciled.

A cross section of the students who spoke with newsmen at the ceremony expressed gratitude to the state government for the establishment of the University, noting that it brought an end to their several years of fruitless search for admissions in universities.

Spread the love ...let others enjoy this story
Share
Previous NIGERIAN NAVY ON SURVEY OF RIVERS NIGER AND BENUE
Next Burial Service Holds In Yola For Slain Brigadier-General, Four Other Soldiers