Prof. Osinbajo stated this on Monday at the commissioning of the new multi-billion-naira civil service secretariat complex in Asaba, Delta State capital, which was named after the Asagba of Asaba (traditional ruler of Asaba), Prof. Chike Edozien.

The Vice President, who was received at the Asaba airport by the Delta State governor, Dr. Ifeanyi Okowa, noted at the secretariat that the commissioning was historic, “because the seat of the civil service of any arm of government anywhere in the world is usually one of the major monuments enshrining not just the power, but also the splendour of the authority of government.”

“This imposing complex clearly meets this requirement. In due course, such buildings become historical monuments,” a statement by the VP’s spokesman, Laolu Akande, quoted him as saying.

According to the VP, the civil service is the very tip of the spear of governance, and optimal public service delivery requires an efficient civil service.

“Such a public service requires training, and capacity building but also workspaces that are well equipped, conducive, and inspirational. We have heard already how inspired the public servants today are and they are even spending long hours in the office. This is very commendable indeed. Public servants require environments that bring out the best in them. This secretariat complex will provide such an environment,” he stated.

The VP, who described the new secretariat as a state-of-the-art, functional, and befitting secretariat complex, said it was befitting that the state decided to immortalize the name of one of Delta State’s and Nigeria’s most illustrious sons.

He also observed that the recognition the Delta State government has accorded Prof. Edozien would serve as an inspiration and a pointer to the kind of excellence required in public service.

According to Prof, Osinbajo, “in naming this building after His Royal Majesty, you are not just celebrating a highly respected and deserving son of Delta State and Nigeria, you are also signaling the sort of excellence in public service that we wish to see incubated within this complex.

“But perhaps more importantly, you are saying to a generation, not old enough to be employed in the civil service today, that integrity, diligence, and service to community and country still pay. It is my hope that this place will, like the eminent personage after whom it is named, be a symbol of unity and distinction.”

He further said the State Governor deserved commendation for being able to provide the funding for the laudable project “despite dwindling revenue receipts and severe resource constraints across all levels of government in our country.”

Earlier, the Vice President had also commissioned an 8.5MW Power Plant with a 25km distribution network in Asaba right behind the new secretariat.

The Independent Power Project, which was jointly facilitated by the Delta State government and Bastanchury Power Solutions, is now providing 24/7 electricity supply to the State Government House and the Secretariat in Asaba.

The plant was set up under a Willing Buyer-Willing Seller basis, an arrangement between the state and the firm that did not require a Power Purchase Agreement, PPA, which would normally require a Sovereign Guarantee.

On the essence of building capacity in the public sector, the VP noted that “whether we are talking about the need for more internally generated revenues and greater tax efficiency to compensate for resource deficits, or the management of a public health crisis such as a pandemic, or even the drive for more internally generated revenue, it is the capacity of the public sector that is invariably at issue.”

The Vice President, who had earlier paid a courtesy call to the Palace of the Asagba of Asaba, noted that the traditional ruler was a bridge builder who brings people together.

“His Royal Majesty, Prof. Chike Edozien, the Asagba of Asaba – Nigeria’s oldest living professor in any discipline and an internationally renowned Professor of Medicine, but more importantly an outstanding bridge-builder and patriot.

“As Your Excellency confirms, His Majesty has played and continues to play an important role as a symbol of unity in this State. And that during his thirty-year reign so far, the town of Asaba has changed dramatically becoming the capital of the newly-created Delta State in 1991 and has attracted people from far and wide that have come to seek their fortunes here,” the VP stated.

In his remarks at his palace, the Asagba of Asaba, Prof. Chike Edozien, who thanked Okowa for the recognition given him, described Vice President Osinbajo as a wise man.

“As the Vice President of this great country, Nigeria, we know you as a very distinguished and eminent supporter of law, and we know you as a pastor of the Redeemed Church. Put together, we can say that with all these qualifications and experience, you are a wise man.

“Once again, Mr. Vice President, I thank you for coming to Asaba to listen to us. We wish you well, and that after the commissioning, you return safely to Abuja. Our love and regard to Mr. President. God bless you.”
Also, at the commissioning of the Secretariat, Governor Ifeanyi Okowa while welcoming Prof. Osinbajo to the State, noted that “Mr. Vice President is a true statesman and an uncommon leader.”

Spread the love ...let others enjoy this story
Share
Previous Four Killed As Fire Guts Building In Barcelona
Next Lewandowski Wins Striker Of The Year At 2021 Ballon d’Or Awards 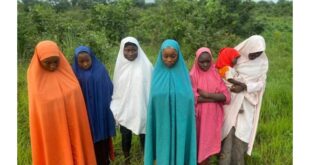