A trending video of a corps member proposing to a female soldier at the Yikpata orientation camp of the National Youth Service Corps (NYSC) in Kwara State has elicited a flurry of reactions. 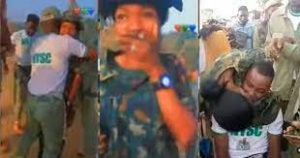 This corps member-army love tango is coming after a video clip of a female soldier assaulting a female NYSC member in Cross River State surfaced online in September, sparking an outrage.

Report has it that the latest open display of affection happened at the Passing Out Parade of Batch B, Stream 2 during the week.

In one of the now-viral videos seen by The Nation, the yet-to-be-identified corps member is seen holding a ring.