Six Arrested For Alleged Murder Of Monarch In Taraba 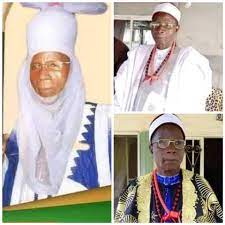 Six suspects have been arrested in Taraba for killing the traditional ruler of Yukuben chiefdom in Takum Local Government Area of the state.

The victim – Udeng Ibrahim Yamusa – was killed on July 28 along with his son who was also his driver.

Before killing the duo, the gunmen had kidnapped the traditional ruler and his son on Thursday in an ambush while returning home from Takum, the headquarters of Takum LGA.

But addressing reporters on Tuesday in Taraba, the State Commissioner of Police, Abimbola Sokoya, said thorough investigations have been launched to ensure that other culprits are not spared.

Noting that the State Police Command has also recorded some casualties, Sokoya assured that peace will be restored in an area gripped with violence.

He also reiterated the commitment of police operatives to tackling the several security challenges rocking the North-Eastern state.

“On Thursday, July 28, 2022, information came that the chief of Yukuben, Takum Local Government Area of Taraba State was missing and we sent out a search party to rescue or bring him back wherever he was,” the CP said.

“However, on Friday, July 29, the corpse of the chief was discovered in a bush in Isa Local Government Area. Presently, we have commenced the investigation into that matter and we are having some suspects that are helping us in the investigation.

“We have six suspects that have been arrested and the investigation is ongoing.”

Spread the love ...let others enjoy this story
Share
Previous We Are Making Progress In Tackling Banditry, Terrorism – Buhari Tells Diplomats
Next JUST IN: US House Speaker Pelosi Lands In Taiwan Despite China’s Warnings