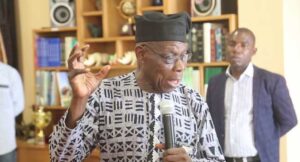 Ex-President Olusegun Obasanjo has lamented the rising cost of diesel, saying it has adversely affected his fish business.

Speaking during a southwest fish farmers’ congress on Tuesday at the presidential library (OOPL) in Ogun State, Obasanjo said the high diesel price may turn fish farmers into bankruptcy.

Putting the current price of diesel at N800 a litre, the ex-President said the production of a kilogram of fish is N1,400.

“I am already sweating and if the situation does not go down, anybody that is using diesel, I don’t know your calculation, my calculation is that I cannot produce a kilo of fish with less than N1400. That’s about what it cost as of today. So, if I sell my fish around N1,400 I cannot make a profit,” the ex-President was quoted as saying in a statement by his media aide, Kehinde Akinyemi.

He said farmers must not sell less than N1,500 as anything short of that would lead to “outright loss”.

“And while we are working on coming together, I thought that the situation has arisen whereby we have to do something urgently.

“The price of diesel has gone sky high because the management of this country is not what it should be. And it is as simple as that.

“Then, what will happen is that particularly those of us who have to use a bit of diesel in producing fish, we will completely go bankrupt, and when that happens, Nigerians will still have to eat fish.”

“And you will go jobless, poor, and indigent. So, what do we have to do? To come together… we want to sustain fish production, and we must be able to take care of those who are going to eat and those of us who are producing.”

According to Obasanjo, fish production would be out of reach, and “then people will be producing fish outside Nigeria and dump it here”.