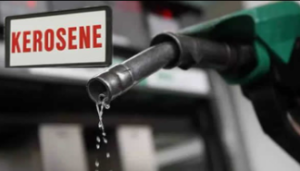 The price of kerosene used by several families have jumped to N800 per litre just as the market is beginning to adjust to the newly increased petrol and gas prices.

Latest report on Tuesday showed that one litre of cooking kerosene, sold for N700 last week, now sells for between N800 and N850 in urban parts of Lagos State, while the price has hit as high as N1000 per litre in suburb areas at filling stations.

Unlike petrol, kerosene is a deregulated product- meaning prices are determined by market forces.

As of June, the Nigerian Bureau of Statistics, NBS, had reported an 88 per cent rise in prices of cooking kerosene and Liquefied Petroleum Gas within in one year.

According to the NBS report on “National Household Kerosene Price Watch,” the price of cooking kerosene went up by 86.94 per cent in one year.

The report also said that the average retai

Spread the love ...let others enjoy this story
Share
Previous Our Govt Will Be Fair And Inclusive If Elected, Shettima Assures Nigerians
Next Charly Boy yearns for bachelorhood, says marriage tough