Peter Obi: I will go after Obi-dients if they come after me — Oshiomole 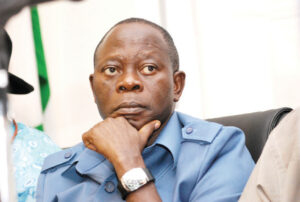 A former National Chairman of the All Progressives Congress, Adams Oshiomhole, has said the supporters of the presidential candidate of the Labour Party for the 2023 elections, Peter Obi, should expect his retaliation if they come after him.

Oshiomhole said this during an interview on Arise TV after answering a question on the LP presidential candidate.

He said on The Morning Show of Arise TV on Wednesday that most of the presidential candidates who had spoken have not sufficiently, in most cases, addressed how they are going to tackle Nigeria’s challenges.

He said: “Those who have rushed out what they want to how much have they done expatiating on how they are going to do it.”

He said Obi in particular got away with intriguing several intriguing questions put across to him.

When told by his interviewers that Obi’s supporters, known as Obi-dients, will come after him if he criticises their candidate, Oshiomhole replied: “I will come after them.”