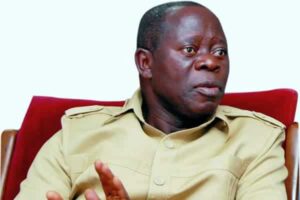 A former National Chairman of the All Progressives Congress, Adams Oshiomole, has told Nigerians not to judge the party’s presidential candidate for the 2023 elections, Asiwaju Bola Ahmed Tinubu, with the performance of the administration of President Muhammadu Buhari.

The former two-term Governor of Edo State said this in reaction to a statement when he appeared on Arise TV.

Oshiomhole said during the interview on Wednesday: “It is a fact that Asiwaju himself said he co-founded the APC.

“I was a co-founding governor of the APC along with (Babatunde Raji) Fashola (former Governor of Lagos State) and other governors, but he never participated in governance, never held or carried out any contract on behalf of the government and so crediting him is totally wrong.

“This is just being fair and it is not the Vice President who announced that he has been given the responsibility by the President to chair the economic team and so you cannot ask him to account for some economic policies.

“You cannot say that someone who never in any way participated in the government should be credited with the outcome of government policies or blamed either way.”

On the Muslim-Muslim ticket of the APC for the presidential election, Oshiomhole said: “Tinubu is a Muslim who married a Christian and did not force his wife to adopt his own religion, which some practices has shown over time.

“Many governors upon leaving office book a seat at the senate.

“Asiwaju, upon leaving office, did not do that, but he encouraged his wife to go to the Senate.

“He did not go to the Senate himself.

“It turned out his wife has been one of the most active senators.

“So, I think the outcry from the Pentecostal Fellowship of Nigeria as well as the Christian Association of Nigeria is just all blackmail.

“I also think our challenge is beyond religion.

“Rather, we should be talking about evaluating these candidates and what they would do to transform the economy.

“CAN or PFN is not speaking for Northern Christians.”

Spread the love ...let others enjoy this story
Share
Previous Instagram influencer, Mompha, declared wanted by EFCC
Next Peter Obi: I will go after Obi-dients if they come after me — Oshiomole