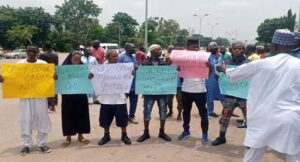 Some youths of the All Progressives Congress in the Abuja Municipal Area Council (AMAC) have staged a peaceful protest over what they described as the failure of the Federal Capital Territory (FCT) Minister, Mohammed Bello to swear in the APC candidate, Murtala Karshi despite the court order to do so.

They accuse the minister of colluding with the opposition party, the Peoples Democratic Party (PDP) against his party.

On Friday last week, an election tribunal sitting in Abuja nullified the election of the AMAC Chairman, Zakka Maikalangu of the PDP who polled 19,000 votes in the February 2023 FCT election.

The tribunal granted over 21,000 votes to the APC candidate in the election and ordered that he should be sworn in as duly elected chairman of AMAC.

However, before the swearing-in of the APC candidate, Murtala Karshi, the PDP secured a stay of execution.

According to the protesters, the minister’s inability to act promptly on the order of the court is why the PDP candidate is still in office.

The leader of the protesters, Muhammad Kabir says the action of the minister leaves much to be desired, as he questions his allegiance to the APC.

“It baffles our imagination that the minister delayed in acting on the order of the court. We think he is working against the party,” Kabir said.

The protesters who carried placards with various inscriptions called on the leadership of the APC to prevail on the FCT Minister.

Meanwhile, the PDP has described the action of the APC youths as chasing after the shadow.

Speaking to journalists at the FCT PDP Secretariat located in Zone 4 area, the party’s Vice-Chairman, Mahmud Muhammad said the APC should allow the law to take its cause and not try to subvert the law.