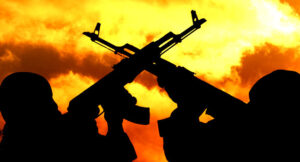 An eyewitness said that the hoodlums first raided the residence of Mani Babba Kaita and kidnapped his wife.

They thereafter moved to abduct his neighbour’s – Sabe Halilu – children after beating their mother.

Police authorities are yet to confirm the incident. Several phone calls put through to the police spokesman SP Gambo Isah did not go through. He also did not reply to a text message sent to his mobile phone number.

Residents are calling for prayers from Nigerians and beyond for the situation to be brought under control.