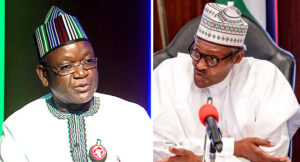 Ortom who disclosed this on Monday while playing host to a delegation from the Northern Christian Women Coalition at the Government House in Makurdi, says the move became necessary following the legitimated process of establishing the Guards to help restore peace in the troubled parts of the state.

He said the President he knows would approve his request to also empower his people against their transducers or at best, leave room for a fair level of response on the defences of his people.

During the launch last week, the guards, the Governor said, are designed to address community security and safety.

According to him, the volunteer guards were not established for political purposes ahead of the 2023 general elections.

The Governor urged men of the volunteer guards to avoid the temptation of abusing the powers conferred on them by the state’s law.