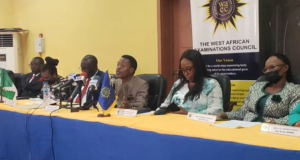 The 2022 West African Senior School Certificate Examination (WASSCE) results have been released with those of 365,564 candidates in connection with various reported cases of examination malpractice withheld.

This was disclosed by the Head of National Office, West African Examinations Council (WAEC), Patrick Areghan during a briefing in Lagos on Monday.

Announcing the release of the results, he lamented that the students’ preparations for the examinations were poor, saying they were no longer ready to learn.

According to Areghan, 365,564 candidates represented 22.83% of the total number of candidates that sat the examination, adding that the number was 11.74% higher than the 10.9% recorded in the WASSCE for School Candidates, 2021.

“Reasons for this are not far-fetched. Candidates are no longer ready to learn. Preparations for examinations are poor,” he said.

“There is over-reliance on the so-called ‘Expo’, which is actually non-existent. Candidates simply got frustrated when they got into the examination hall and discovered that all they had celebrated was fake.

“This has pitiably led to some of them failing the examination, which if they had relied on themselves and studied hard, would have passed like many others.”

He stated, “The analysis of the statistics of the performance of candidates in the examination shows that out of the 1,601,047 candidates that sat the examination, 1,409,529 candidates, representing 88.04%, obtained credit and above in a minimum of any five subjects (i.e with or without English Language and/ or Mathematics.

“1,222,505 candidates, representing 76.36%, obtained credits and above in a minimum of five subjects, including English Language and Mathematics.”

Areghan stressed that the results of candidates who were sponsored by states indebted to the Council would not be released until they pay up.