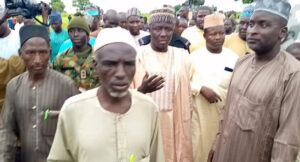 At least 12,000 Internally Displaced Persons (IDPs) in Katsina State have been returned to their various ancestral communities at Shimfida town in Jibia Local Government Area of the state.

The reason is to allow them fully commence farming activities as some of them have started farming in the area.

Their return, facilitated by the State Government, was coming barely five months after persistent terrorist attacks in their communities forced them to flee for safety.

Speaking shortly before their return, the Chairman of Jibia Local Government Area Hon. Bashir Sabiu Maitan announced that the IDPs were being taken care of by both the State and the Council.

He revealed that the IDPs, who were relocated to the neighbouring Niger Republic, were earlier in the day brought back to Jibia Local Government where they would join others on the trip back to Shimfida town.

Maitan disclosed that an initial N88.6 million was doled out by the State Government for the exercise, adding that the second tranche of N18m has also been approved by Governor Aminu Masari for the provision of drugs and logistics for the IDPs and essential workers in the community.

He said a third tranche, which was also in the millions of naira, was also being awaited and would be expended on the installation of windows and doors for the accommodation provided for the IDPs in Shimfida.

According to Hon. Maitan, Governor Masari had already spoken to President Muhammadu Buhari and the President had assured of adequate security escort for the IDPs on their trip back to their town. He stated that the escort would also be stationed in the community.

“The reason why we are returning them is simply that some of them have started farming in the area; we want them to go back and fully commence farming activities.

“It was the Army that left the area earlier that gave in to the sack of the community and Governor Masari had spoken to President Muhammadu Buhari and approval has been given for the redeployment of the soldiers.

“More than 10,000 bags of 10 – kilogram rice has been purchased for onward transportation and distribution to the community for feeding. As of today Monday, an initial 2,000 bags were sent to their community,” Maitan added.

Earlier in his remarks, the Chairman of Shimfida Youth Development Association Sa’adu Salisu expressed satisfaction with the State Government’s effort to return the IDPs home, stressing that adequate security should be put in place in the community to prevent the recurrence of terrorist attacks.

He, however, alleged that more than 20 IDPs – mostly women and elderly – have died due to blood pressure and related ailments since they left their community.

killed and several others injured and kidnapped in a stampede of residents fleeing from bandits in Shimfida village of Jibia Local Government Area of Katsina State.

A resident of the area Abdulrazak Ahmad said  that the tragedy occurred between 10:00 am and 12:00 am after soldiers serving in a joint security task force were totally evacuated and withdrawn from the community.

According to him, the withdrawn soldiers were initially stationed at the Government Secondary School, Shimfida, about 27 Kilometres from Jibia town

Spread the love ...let others enjoy this story
Share
Previous There Is No Justice In Nigeria – Gumi
Next 58-year-old woman kills husband’s side chic in Adamawa