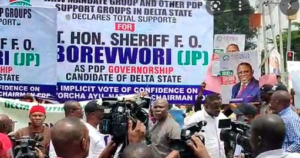 Protesters stormed the National Secretariat of the Peoples Democratic Party (PDP) in Abuja, the nation’s capital.

The protest borders on the controversy trailing the emergence of Sheriff Oborevwori, who is also the Speaker of the Delta State House of Assembly, as the PDP governorship candidate in the 2023 general elections.

On July 7, a Federal High Court in Abuja disqualified Sheriff Oborevwori over alleged discrepancies in his certificates.

A month after the judgement, dozens of protesters, who are Oberevwori’s supporters, carried placards to air their grievances. At the Wadata Plaza, the aggrieved PDP members insist that they want an audience with the party’s leaders.

The protesters who kept chanting “no Sheriff no PDP in Delta State” said they will not speak to journalists until a member of the PDP National Working Committee comes to address them.

The PDP in Delta state is split between those supporting the current Speaker of the State House of Assembly and an ex-Finance Commissioner, David Edevbie who was the second runner-up in the party’s governorship primaries.

Although Oberevwori has appealed the July Federal High Court judgement which disqualified him from the race, the PDP National Secretariat has witnessed series of protests both for and against the Speaker since the judgement was given.

During the PDP governorship primary in May, Oborevwori polled 590 votes to beat his closest rival – Edevbie, who was Finance Commissioner during the James Ibori administration, who polled 113 votes.

While Oborevwori is the preferred candidate of Delta State Governor, Ifeanyi Okowa, former governor James Ibori, is said to be backing Edevbie.

Aggrieved by the outcome of the primary, Edevbie had filed a suit alleging discrepancies in Oborevwori’s certificates.