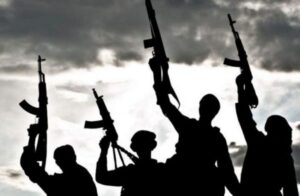 Terrorists have abducted a woman and her four children in Giwa Local Government Area of Kaduna State.

The woman is the daughter-in-law of the village head of Yakawada, Alhaji Rilwanu Saidu, who is the elder brother of the Chairman of the Northern Elders’ Forum( NEF), Professor Ango Abdullahi.

Police authorities have not commented on the incident, but a close relative of the family, Umar Sani, told Channels Television that the woman, Ramatu Samaila, was abducted along with her children from their residence during the attack which occurred on Tuesday night.

He said the bandits in their large numbers invaded Yakawada village and started shooting sporadically before moving to the village head’s residence.

The bandits also kidnapped some residents of the community including one Abubakar Mijinyawa and his two wives, Aisha and Hajara.

The two wives who are both nursing mothers were reportedly taken away along with their babies while a local patrol guard, Aminu Lawal, was killed by the attackers during the attack.

The kidnapping of five members of Professor Abdullahi’s family comes almost four months after his son, Sadiq Abdullahi, and 61 others were abducted by terrorists who attacked an Abuja-Kaduna-bound train on March 28.