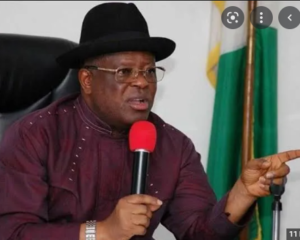 Governor Dave Umahi of Ebonyi State says the Nigerian government cannot borrow N1.1 trillion to meet the demands of the Academic Staff Union of Universities (ASUU) who have been on strike for over five months.

The Chairman of the South-East Governors’ Forum said this on Wednesday when he received a delegation from the Nigeria Police Trust Fund led by Dr. Ben Akabueze, in Abakaliki, the Ebonyi capital.

“There is no way Nigeria will go and borrow N1.1tn to meet ASUU’s demand, it’s quite unreasonable. Are their demands genuine? Yes. But we can start little by little,” the governor said.

“There must be a commitment on the side of both parties that look, ‘ASUU is not asking for this to take to their houses’ so to say. It’s asking for it for our children, to better the infrastructure, to better the lecturers and the students. Yes, but we can start with a fraction of that and then have a programme that will run on the platform of sincerity to address all the lots.”

He also called on varsities lecturers to show some level of understanding so the strike can end.

“Let’s meet ourselves halfway and then open the schools to save the fate of our children.”

The governor, who equally faulted the poor maintenance culture in the country, added that there is a need to work on it.

“But let me also say that most of the time, our people have a low appetite for maintenance of public works,” Umahi said.

“No matter how much you deploy to these universities unless the users and the industry regulators begin to treat public infrastructure as their own in the various universities, it will continue to go bad.