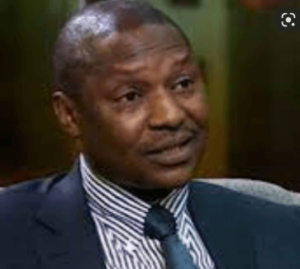 The Attorney General of the Federation and Minister of Justice, Abubakar Malami, on Thursday, said that state governors have no basis for complaining about Paris Club refund deductions paid to consultants they hired.

He made the comment at a ministerial media briefing at the State House in Abuja.

Malami also explained that the governors took steps to pay the consultants and later decided to stop payment while asking for an out-of-court settlement when the matter was dragged to court.

This, according to him, resulted in a request to President Muhammadu Buhari to make the payment, which was then passed on to the Office of the AGF for a legal opinion.

“The Governor’s forum comprising of all the governors sat down commonly agreed on the engagement of a consultant to provide certain services for them relating to the recovery of the Paris Club. So, it was the governor’s forum under the federal government in the first place that engaged the consultant,” he said.

“When eventually, successes were recorded associated with the refund, associated with Paris Club, the governors collectively and individually presented a request to the federal government for the fund.

“And among the components of the claim presented for the consideration of the federal government was a component related to the payment of these consultants that are now constituting the subject of contention. So the implication of that is that the governors in their own right recognized the consultant, recognized their claim and presented a such claim to the federal government.

“When the claims were eventually processed and paid to the governor’s forum. They indeed on their own, without the intervention of the federal government took steps to make part payments to the consultants, acknowledging their liability over the same.

“When eventually they made such payments at a point they took a decision to stop the payment. The consultants instituted an action in court against the governors’ forum. And what happened in court? They submitted to consent judgment.

“They asked and urged the Court to allow them to settle out of court. The court granted them an opportunity to settle. They commit terms of settlement in writing, they signed the terms of the settlement, agreeing and conceding that such payments be made to the consultant.”

Reeling other achievements, the Minister also disclosed that the ministry has secured over 1,000 convictions on terrorism, and recovered over 6,324,627.66 pounds of stolen monies from various jurisdictions globally from March 2021 to May 2022.

According to him, the recovered foreign loots have since been deployed towards the execution of major infrastructure projects and used to massively reduce poverty across the country.