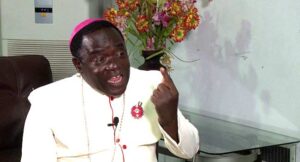 The Catholic Bishop of Sokoto Diocese, Mathew Kukah has described the decision of the All Progressives Congress to field a Muslim-Muslim ticket for the 2023 presidential elections as “totally reprehensible.”

Kukah made the comment while speaking on Channels Television’s Politics Today.

He faulted the APC for creating an artificial divide between Christians and Muslims and mismanaging the country’s identities.

“The 2015 election had laid a solid foundation for a lot of hope about national integration,” Kukah said. “But very clearly I don’t think anyone who lives in this country can deny the fact that we’ve had the most horrible mismanagement of our identities.

“So what you call tensions between Christians and Muslims, Northerners and Southerners is an artificial creation; but it is a natural human response to the fact that people have seen very clearly a skewed, unacceptable strategy for managing power and identities.

“So people would naturally respond. If you walk into the room and say all women should walk out of the room, you are making a statement.

“As a Christian, this is totally reprehensible; it is not acceptable to me. But that’s the decision of the APC as a party.”

Bishop Kukah also said criticism should be a norm in any democracy.

“If the President didn’t think it was rude to ask for my vote, why should it be rude for me to ask him questions,” he said. “Because democracy is about contestations. It is not about claims. We are not living in an authoritarian regime.

“We are living in an environment where people must develop the capacity bang at the doors of those in power and insist that the promises they made to us have not been fulfilled.

“So this engagement is what drives democracy. Democracy is not going to happen simply because good men and women have made us promises.”