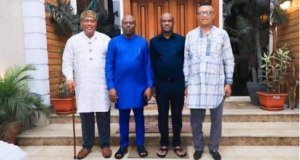 The Publicity Secretary of the All Progressives Congress in Rivers State, Chris Finebone has dumped the party for the Peoples Democratic Party.

The pictures of Mr. Finebone standing in a group photograph with Governor Wike, and others surfaced on social media on Thursday evening.

Others in the picture are the PDP Governorship Candidate in Rivers State, Siminialayi Fubara and the pioneer Chairman of the APC, Davies Okanya-Ibiamu who had since joined the PDP.

Mr. Chris Finebone confirmed to Channels Television on Friday morning that he joined the PDP to support the PDP Governorship Candidate who is his kinsman from Opobo.

Mr. Finebone, who has been the State Publicity Secretary of the APC since its inception in Rivers State, is known for his vocal, strongly-worded and critical press statements against the PDP, the administration of Governor Nyesom Wike and other individuals and groups that seem to be working against the interest of his former principal, the immediate past Minister of Transportation, Chibuike Amaechi.

His latest piece was the text of a press conference he released on June 20 to react to the exit of Senator Magnus Abe from the APC as a “successful excision of a debilitating cancer from the body”.

On July 7, he released a statement titled, “Why is Gov. Wike Terribly Scared”, to react to the Governor’s threat to demolish hotels linked to the alleged recruitment of cultists and ex-convicts to execute the 2023 general elections.

In the statement he asserted that “the APC is not surprised at the threat by Gov. Wike whose house, the PDP is crumbling fast right in his face. For obvious reasons, his main men of yesterday have turned political foes today. His entourage has seen faces change over and over again of late. We know his threat is essentially directed at his henchmen who have taken their destinies in their own hands and rebelling against the local potentate. Across the State these men have pitched their tent with Wike’s tormentor-in-chief, Alhaji Atiku Abubakar.”

When asked by our correspondent how he feels about his seeming vituperations against the PDP, Mr. Finebone said, “I have put a portion of my past history behind me. If it were to be possible, I would have released the last statements yesterday and still move on”.

Many bigwigs of the APC have recently dumped the party for many reasons.

Some of them like Senator Magnus Abe and a former member of the House of Representatives, who served as the Chairman of the APC reconciliation committee in Rivers State, Dawari George recently emerged the Governorship candidates of the Social Democratic Party and the Action Alliance, respectively.