This Is Not Your Time, Dino Melaye Dismisses ‘Frenzy’ About Obi 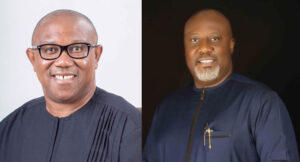 The spokesman of the Atiku Campaign Organisation, Dino Melaye, has dismissed the social media frenzy generated by Peter Obi, saying the Labour Party presidential candidate does not stand a chance of winning next year’s poll.

Senator Melaye maintaining that social media does not win elections in Nigeria.

“To start with, there is no wave. What you have is euphoria; a created euphoria,” he said during the show.

“Let me even tell you, Peter Obi is a fantastic Nigerian. I have tremendous respect for him and I have said it before but this is not his time. He does not have what it takes now to unify the country.”

He restated that social media popularity does not equate to voting power. Melaye cited the recent performance of the Labour Party in the Osun State governorship election as an indication that social media is different from the reality on the ground.

“Despite Peter Obi visiting Osun to campaign for his party’s governorship candidate, the performance of the Labour Party was 2,700 votes,” Melaye argued, stressing that people should not be carried away by the “euphoria”.

The former lawmaker, who was recently named as the spokesperson of the Atiku Campaign Organisation, also dismissed Obi’s ability to reposition the economy – which is the main thrust of the ex-Anambra governor’s campaign- if he wins.

“Even when you talk about the economy, you need peace; you need to build trust among Nigerians,” the Kogi-born spokesman said.

As far as he is concerned, only his principal, Atiku, has the capacity to unite Nigeria and tackle headlong the challenges facing the country.

“Today, among all presidential candidates, Atiku is the only one that can be trusted; that nobody will see him as a religious bigot, tribalist; or ethnic jingoist.”