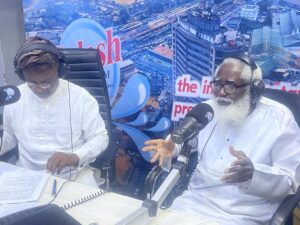 Former Ambassador to the Philippines and veteran broadcaster, Dr. Yemi Farounbi, has said that it was not surprising to him that President Muhammadu Buhari has turned out to become “Nigeria’s punishment”.

The veteran broadcaster and commentator said this when he featured on a weekly radio show: “Ayekooto on Radio.”

The programme is anchored by Olayinka Agboola and broadcast live on Splash 105.5FM, Felele, Ibadan, the Oyo State capital.

He emphasised that God is using President Buhari to punish Nigerians because “in 2014/2015 when we were campaigning, when Nigerians decided to accept the campaign of once chance, they were warned of the past history of Muhammadu Buhari and how he imprisoned many politicians, including Chief Obafemi Awolowo.

“God is a wonderful Being.

“He decided to use Buhari to punish Nigerians for their evil deeds and Nigerians deserve these punishments.

“Nigeria is not what I thought it will be.

“I have incurable optimism that Nigeria will still be better.

“Those who are enjoying proceeds of bribery, corruption, epileptic power supply, insecurity among other vices are not looking forward to seeing a better Nigeria.”

The former ambassador to the Philippines stated that the threats from bandits against President Buhari and Governor Nasir El-Rufai of Kaduna State portend grave danger to the country’s unity.

Farounbi said: “The acts of the bandits have shown that they really mean business.

“They recently ambushed officers from the Brigade of Guards in Abuja and this is an absolute insult and injury to the sovereignty of the country and whenever I hear this, I feel ashamed of our country.

“I was once an Ambassador to the Philippines and whenever I have the opportunity of visiting Cambodia, I was treated with great honour like a saviour.

“One day, I asked the King of Cambodia why I was accorded that honour and he replied that that when Cambodia had problem of insurrection, it was Nigerian policemen that were drafted to quench the mutiny and create order.

“Now we are being threatened by terrorists in our country and our soldiers are almost incapacitated, the Nigerians soldiers that went to Lebanon, Sierra Leone, Liberia and Congo, but now they cannot effectively defend the territorial integrity of their country.”

The elder statesman further stated that there is no difference in the ideologies of the two frontline political parties in Nigeria: All Progressives Congress and Peoples Democratic Party, adding that they are only recycling politicians who have little or nothing to offer the country, while citizens are nonchalant towards their rights.

Farounbi further lampooned the All Progressives Congress for fielding a Muslim-Muslim presidential ticket, stating that such act could further put the unity of the country in jeopardy.

He said: “In any decent society, there are traditions.

“After the annulment of the 1993 election, we felt that there should be equal access to power in such a way that it will rotate between South and North in order that all Nigerians will be equally represented and this agreement is an unwritten rule.

“One of the fundamental principles that guided the establishment of the PDP at inception was that power must be rotated.

“In addition, there must be a balance between the two major religions in power rotation.

“The two political parties broke the unwritten rule of religion and ethnicity in the power rotation because they see Nigerians as impotent.

“We have problem with insecurity and no politician is telling us of how they will find possible solutions to it.

“Politicians are fond of using slogans and lies to take power from us.

“Nigerians must insist that any aspiring political office holder must tell us his vision and manifestoes.

“Instead of focusing all our attention on Muslim-Muslim tickets, we should focus more on the two fundamental issues affecting Nigeria: hunger and insecurity.

Ambassador Farounbi, however, stated that Buhari can still redeem his image by becoming Nigeria’s best president if he could sincerely restructure the country into six geographical zones, adding that such act will help to strengthen the country’s economy and political space.

Speaking on the proposed independent Yoruba nation, he said: “A nation is different from a nation state; you should agitate for what is achievable.

“I have not seen a country that fell from the sky.”

The veteran broadcaster further charged Nigerian political leaders to be sincere with their campaign promises while urging Nigerians to love one another and be prudent with the management of public funds.

Spread the love ...let others enjoy this story
Share
Previous Insecurity: Flush out criminals among you, Akeredolu warns Ebiras in Ondo
Next Pat Utomi can’t appoint spokesman for us — Labour Party