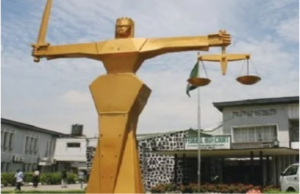 A Magistrates’ Court in Makurdi, Benue, on Monday ordered that two unemployed men be remanded in a correction centre for allegedly forging an NCE certificate.

The police charged Okpa Ijwo, 38 and Nathaniel Onaji, 45, with forgery.

Magistrate Dooshima Ikpambese, did not take the plea of Ijwo and Onaji for want in jurisdiction.

The magistrate ordered that they should be remanded in the Federal Maximum Correctional Centre Makurdi.

She adjourned the case until Sept. 21 for further mention.

Earlier, the Prosecution Counsel, Insp Veronica Shaagee told the court that the case was transferred from the Oju Divisional Police Station to State Criminal Investigation Department (SCID) Makurdi through letter No. AR:3100/BNS/SIB/OJ/VOL.8/170 on Aug 10.

Shaagee said that on July 4, Martin Ogbeche of the College of Education Oju Benue reported the case on behalf of the management of the college.

She said that on Dec. 13, 2021 the suspects and Okpenge Ogor conspired among themselves and forged the College of Education certificate.

During Police investigation, she said the suspects were arrested for committing the offence while the others are at large.

The offence, she said, contravenes the provisions of sections 97and 365 of the Penal Code Law of Benue 2004.

She said an investigation into the matter is ongoing.

The prosecution prayed the court for an adjournment for the police to conclude investigations.

Spread the love ...let others enjoy this story
Share
Previous 2023: ‘I Hope You Get 200’ — El-Rufai Mocks Obi’s Supporters Over Two-Million-Man March In Kaduna
Next NDLEA arrests 611 drug traffickers in Kaduna