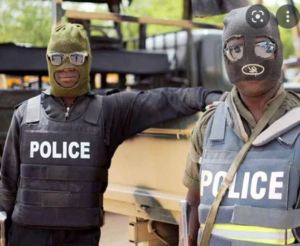 The Edo State Police authorities say the Command on Sunday rescued one kidnap victim and neutralized five (5) suspected kidnappers recovering arms and ammunition from the engagement.

The command in a statement issued through its Deputy Public Relations Officer, Jennifer Iwegbu disclosed that it received credible information it about hoodlums suspected to be kidnappers operating in Ughoshi- Afe bush, Ibillo in Akoko Edo LGA.

According to the police spokesperson, on receipt of the information the command immediately mobilized its tactical team operatives from the Ibillo sector and in collaboration with vigilantes and hunters moved to the scene.

The suspected kidnappers on sighting the operatives reportedly opened fire on them which led to a gun duel that left five (5) of the kidnappers fatally injured.

One kidnap victim, a 38-year-old man with the first name, Innocent is said to have m rescued unhurt and has since been re-united with his family.

Items recovered at the scene include; two locally made pistols, some fetish items and cartridges.

The Commissioner of Police, Edo State Command, CP Abutu Yaro, who commended the operatives for the gallantry exhibited, assured members of the public that the command will continue to work with relevant stakeholders and law-abiding citizens to ensure a safe Edo State now and always.

Spread the love ...let others enjoy this story
Share
Previous IGP Orders Watertight Security Around Schools, Hospitals
Next 2023: ‘I Hope You Get 200’ — El-Rufai Mocks Obi’s Supporters Over Two-Million-Man March In Kaduna