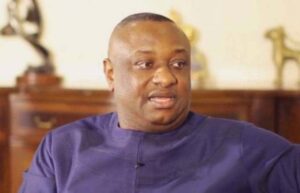 APC presidential campaign spokesman, Festus Keyamo, has responded to Atiku’s statement about how he will not tolerate ASUU strike.

Keyamo, speaking during a television interview, said the PDP government which Atiku is a member and Presidential candidate, is the main cause of the problems ASUU has with the FG.

He said the government signed an agreement they cannot fulfill with ASUU.

“What is the problem of ASUU now? It is the 2009 agreement signed by the PDP government. They went into an agreement with ASUU that they cannot fulfil and so, we had to inherit those agreements and we are struggling to renegotiate those agreements now.

“Let us tell Nigerians that ASUU is not on strike because APC signed an agreement with them; it is the PDP.

Reacting to Atiku’s comment, the Senior Advocate of Nigeria said “Talk is cheap.

“He was Vice President that time.

“We are going to expose them this time.”

Spread the love ...let others enjoy this story
Share
Previous Again, Peter Obi meets Wike, Mimiko, others
Next Strike: ASUU To Meet With FG On Today