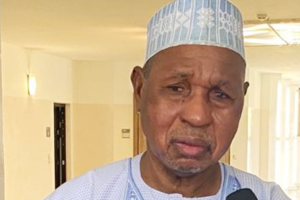 Katsina State Governor, Aminu Masari is confident that the ruling All Progressives Congress (APC) will return to power in the 2023 general elections.

Speaking during an interview with journalists in Igbaja, Ifelodun Local Government Area of Kwara State on Wednesday, Masari dismissed claims by some people that the APC will be sacked next year.

He said that those saying it would be difficult for the ruling party to win do not know what they are saying at all, adding that the issues affecting Nigeria have a global dimension hence, other countries are facing problems.

“On the issue of 2023 and those saying it will be difficult to return the APC in the forthcoming election, that was what they said in 2019 that it will be difficult for the APC to win because of the country’s situation, but it has come to pass that they were wrong,” Masari said.

“The fundamental thing is that the issue affecting this country has global dimensions. The whole world is facing crises and inflation.”

According to the governor, America has been experiencing the worst inflation in the last 40 years. He stated that Ghana too has not been spared as it recorded a 31.7 percent inflation rate in July.

He equally called on Nigerians to pray for their leaders at all levels, saying the citizens have various roles to play in national development.

Masari added, “We have to appreciate what is going on in the world before we unnecessarily criticized on an issue that is global. The issue we have are beyond what one country can solve.

“I consider this as a passing face in our development journey. Countries that are over 400 years old are still facing some crisis. When did the Irish and British overcome theirs?

“See, we have history to learn and borrow from and we should pray for our leaders to do what is right. But all of us should know that we have a role and contribution to make.”