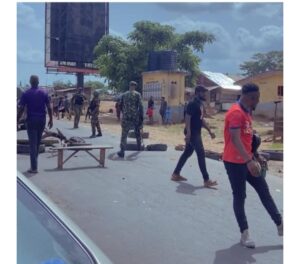 The protesting students of Obafemi Awolowo University, Ile-Ife, Osun State resisted the convoy of the Nigerian Army trying to stop them from protesting the ASUU strike.

Findings show that the soldiers had jumped out of their convoy to disperse the protesting students after dismantling their road blocks.

It was gathered that the soldiers who had earlier dismantled the barricade created by the students on the road at Moro area, Osun State, were later confronted by the mass of students who had retreated but regrouped in their numbers.

The students of the institution have staged protests on different occasions mounting road blocks to demand an end to ASUU strike.

“We booed them away from the barricade today,” one of the leaders of the protest and a member of the Students’ Union Parliament, Abraham Omowumi, also known as Ewatee, said.

The Public Relations Officer of the Union, Ogunperi Taofeek, also said, “The students of OAU again took to the streets today to protest the lingering ASUU strike.

“About 2:30 pm, some of the barricades mounted were broken by men of the Nigerian Army. However, we resisted them at the last barricade, holding them there until the fixed time for our protest lapsed.”

Ogunperi Taofeek noted that the protest would continue on Monday.

The ASUU strike started on the 14th of February with no end in sight.