Domestic Violence Taken Too Far: Wrestler To Die By Hanging For ‘Pounding Wife 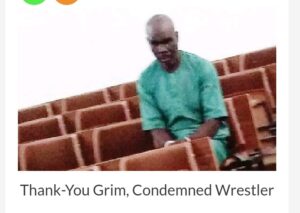 A wrestler in the Guyuk Local Government Area, Adamawa State, Thank-You Grim, has been sentenced to death by hanging for killing his wife, Kwalla Grim.

The wrestler, who was tried by the Adamawa State Chief Judge, Justice Nathan Musa, was sentenced after the court found him guilty of murder.

Justice Musa, while delivering his judgement on Tuesday, said, “The prosecution was able to prove with cogent evidence that the convict actually killed the deceased. Therefore, the convict is accordingly sentenced to death by hanging as provided by Section 192(b) of Penal Code Law.”

Report has it that the convict, who hails from Sili community in the Guyuk LGA, caused the death of his wife on March 24, 2018.

According to court records, Thank-You “wrestled his wife to the ground and used pestle in smashing her face in a dreadful manner with the knowledge that her death would be probable of his act.”

According to records, the marriage between the duo was fraught with challenges before the incident that claimed Kwalla’s life on January 10, 2018.

After the couple ended their union, the victim reportedly fell in love with another man and decided to remarry.

She was said to have mounted pressure on the convict to divorce her.

It was gathered that Thank-You, who earlier rejected her entreaties, decided to agree and lure her to his house, only to plead with her to return to the marriage.

She was said to have refused his entreaties.

The convict, while testifying in court, said he was irked after Kwala disclosed to him that she charmed him.

He claimed that he did not know when he wrestled her to the ground and used the pestle to attack her.

Thank-You disclosed that he chased away some neighbours who attempted to intervene after they heard her cry for help.

According to him, he reported himself to the police at Chikila in Guyuk LGA on that day, where he told the police he murdered his estranged wife.

Reacting to the judgement, counsel for the convict, F. A. Ogbe, the Chief Legal Officer of the Nigeria Legal Aid Council, Adamawa State, appreciated the court for what he described as a well considered judgement.

Spread the love ...let others enjoy this story
Share
Previous ABSURD: Man To Spend 37 Years Behind Bar For Defiling Minor
Next Street Dumping: We Can’t Go Back On September 30th Deadline – ASWAMA

Diaspora Voting: INEC Yet To Assure Nigerians E-Transmission Of Results Is Reliable – Tinubu

‘Can’t You Say Something And Stand By That?’ Wike Knocks Dogara For Backing Atiku

The presidential candidate of the All Progressives Congress (APC), Bola Tinubu on Monday insisted that …