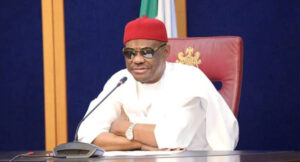 A former Information Minister Professor Jerry Gana on Friday urged Governor Nyesom Wike not to be weighed down by those who may have “disappointed” him recently, expressing optimism that the Rivers State leader will rule Nigeria in the future.

Professor Gana, who praised Wike for his “sustained emphasis on development projects”, said such quality makes the former minister of state for education a prospect for Nigeria’s presidency.

For Rivers State residents to continue enjoying such “good leadership”, Professor Gana told them to queue behind the Peoples Democratic Party (PDP) governorship candidate Siminialayi Fubara in next year’s polls.

“Let me now ask the good people of Rivers State – very wonderful people – to ensure that in the forthcoming elections you vote massively for the candidate of our party who is being supported by this performing governor so that they will be continuity; so that the good things he is doing here can be continued by the next set of people that are going to govern this place,” he told the gathering.

“Don’t make the mistake of throwing away your votes to another party. The PDP will never let you down. We shall do well, excel, perform, and be trustworthy. So, we plead with you in the forthcoming election to ensure that the candidates of our party are supported and elected.”

He told Governor Wike not to be disappointed over the outcome of the PDP presidential primary which he lost to former Vice President Atiku Abubakar earlier in the year.

“Therefore, we want you to stay firm, stay within the PDP, and never waiver because so many people outside Rivers State are looking up to you,” the PDP chieftain told the 54-year-old lawyer.