2023: Bishop at Shettima’s unveiling by Tinubu harassed in Abuja market 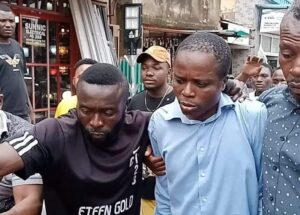 A video showing one of the “Bishops” who attended the unveiling of the vice presidential candidate of the All Progressives Congress for the 2023 elections, Kashim Shettima, Reverend Hilary C. Okafor of Madalla, Niger State, being harassed in Deidei Building Material Market New Site, Abuja, has surfaced online.

In the video, which went viral over the weekend, the “Bishop” was said to have gone to the market for a plumbing job.

Recall that there had been controversy over the real status of the Christian cleric present at the unveiling of Shettima by the presidential candidate of the APC for the 2023 elections, Asiwaju Bola Ahmed Tinubu, in Abuja.

The Christian Association of Nigeria and its affiliates had denounced the clerics at the unveiling.

This followed the controversy generated by the decision of Tinubu to appoint a fellow Muslim as his running mate.

On recognising Okafor as one of the Bishops at the unveiling of Shettima at the Dei Dei Building Materials Market, a mob descended on him, shouting as he was being led out: “One of the Bishops Tinubu used.

It took the intervention of operatives from the Deidei Building Material Market New Site Police Outpost in Abuja to rescue him.

Adeh said: “Not knowing how far this will go, and to preserve his fundamental human rights, the police swung into action and saved him from further embarrassment

“The FCT Commissioner of Police cautioned anyone who would desire to violate the rights of others while hiding behind a social or political facade to drop the notion or face the appropriate legal repercussions.”