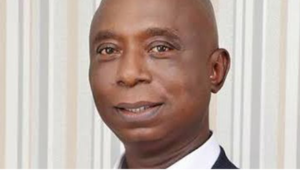 The Nigeria Governors’ Forum (NGF) has accused the lead counsel in the Paris Club refund case, Ned Nwoko, of telling what it described as “half-truths” following the latter’s claim that the governors demanded and received $100 million to prosecute elections in some states.

A statement by the NGF on Sunday said Ned’s claim in Saturday’s press briefing is an attempt to hide the truth.

“In his desperation to justify his claim, NED peddled untruths that his team was a member of the Federal Government Committee constituted to reconcile figures under the Paris Club refunds to the States and Local Governments. That is patently false,” the NGF’s Director, Media and Public Affairs, Abdulrazaque Bello-Barkindo, said in the statement.

“The report of that committee dated May 2007 shows that only the FMF, OAGF, CBN, DMO, and RMFC (secretariat) were members. Private persons who were not privy could not have been included in a committee that was meant to examine purely public financial records. It was this Committee that did all the work now claimed by NED and the other consultants.”

It also said “the desperate, spurious and futile advocacy mounted and coordinated by the AGF on behalf of the so-called Paris Club Consultants to justify the plundering of the humongous sum of USD418.9m from the public treasury of the States and Local Governments continued on Saturday 20th August 2022, when Ned Nwoko, in a press statement, attempted to blur and obfuscate the real facts and legal issues in controversy by dishing out blatant lies and half-truths.

“The facts are and will always remain: whether the claims of the consultants are lawful and justified under our Constitution and whether any Judgment which is a subject of a pending appeal can be enforced or executed as the consultants now attempt to do? If both questions are answered in the negative, it does not matter if the contracts leading to the claims were entered into by any public official, past or present.”

The NGF noted that it will not waste time defending “unsubstantiated claims”, maintaining that its “role in the whole of this Paris Club refund debacle to consultants is to ensure that Nigeria citizens are not unlawfully deprived of resources meant for their development”.

“NGF will not, therefore, waste its valuable time to defend unsubstantiated allegations against individuals or persons who are in a position to defend themselves. If NED is sure of his facts, he is at liberty to approach the necessary authorities to bring to justice any person or persons and all conspirators (including himself) who were allegedly involved in misappropriating public resources for campaign financing,” the statement further read.

“The NGF hereby states unequivocally that it has not at any time been involved in or been in receipt of USD$100m or any other funds from NED Nwoko to finance elections in any State.”

Spread the love ...let others enjoy this story
Share
Previous Having Nat’l Chairman, Presidential Candidate From North Is Unfair – PDP BoT Chair
Next 2023: Bishop at Shettima’s unveiling by Tinubu harassed in Abuja market