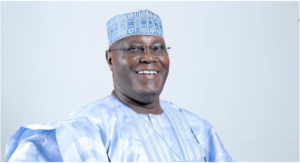 The presidential candidate of the Peoples Democratic Party (PDP) Atiku Abubakar has promised to create a conducive environment for investors, saying the government does not have enough infinite resources.

Atiku made the remark on Monday at the opening ceremony of the 2022 Nigerian Bar Association (NBA) Annual General Conference.

“The only way is to make sure that you make conducive environment available to both foreign and local investors to participate in our country, whether it is infrastructure, whether it is education, whether it is power,” he said during the event held in Lagos State.

The former vice president, who also spoke about the state of education in Nigeria, believes devolving the sector is one sure way to make things better.

“I had an argument with a university professor from the Federal University, Lokoja. He said he read in my policy document that I intended to devolve, in other words, to return education to the states. How dare I do that?

“I said the children you send to America, to England, who own those universities? Mostly the private sector. So, why is it that you think we cannot do it here?’ We don’t have the money.”

Atiku’s comment on the state of universities as the Academic Union of Universities (ASUU) strike enters into its sixth month. Negotiations between the Federal Government and the lecturers have thus far not yielded the needed results.

Spread the love ...let others enjoy this story
Share
Previous I Don’t Care If President, VP Are Of Same Religion – Soyinka
Next NDLEA Arrests 63-Yr-Old Grandpa For Shipping Illicit Drugs To Daughter In Dubai