US To Return $23m Abacha Loot 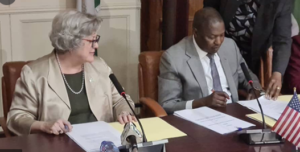 Nigeria and the United States government have reached an agreement on the return of over $23 million of the Abacha loot.

The agreement signing ceremony was held in the office of the Minister of Justice and Attorney General of the Federation, Mr. Abubakar Malami on Tuesday.

According to Mr Malami, the fund when returned will be invested in three ongoing projects by the Federal Government, including the ongoing Abuja-Kaduna road and the 2nd Niger Bridge.

Nigeria has in the past recovered several other tranches of the Abacha loot, which are proceeds believed to have been diverted from public coffers by the military administration of General Sani Abacha in the 1990s.

In 2020, the US and Jersey also agreed to return over $308 million in confiscated funds to Nigeria.

In 2006, about $723 million in Abacha loot was returned to Nigeria from Switzerland.

Spread the love ...let others enjoy this story
Share
Previous Angry Father Shuts Salon Of Daughter Who Refused Being Trafficked To Italy For Prostitution
Next ‘Stop Checking Phones On The Road’, Force PRO Warns Policemen