Improved Security Led To Shutdown Of All IDP Camps In Yobe – Gov Buni. 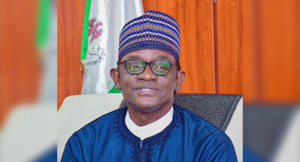 Yobe State Governor Mai Mala Buni has said improved security led to the shutdown of all internally displaced persons camps in the state.

He made the comment while speaking at a Lake Chad Basin Commission meeting on Wednesday.

“Yobe state now enjoys increased peace and security,” the Governor said. “That resulted in the closure of all internally-displaced persons camps, as our displaced persons have since returned to their original communities or decided to permanently remain in host communities.

“The growing peace in the state has enabled our administration to rebuild basic infrastructure and restore public utility services that support our people to move about in search of legitimate means of livelihood.”

The Lake Chad Basin Commission meeting was attended by the Governor of Far-North in Cameroon, Mr Mijin Yawa Bakari.

Mr Bakara is the Chairman of the Lake Chad Basin Commission.

Participants at the meeting resolved to come up with a global action plan that would mitigate the challenge of trans-border insecurity as well as increase economic growth in the region.

Over the years, the challenge of trans-border insecurity has always been an issue of concern in Nigeria and neighboring countries of Niger, Chad and Cameroon.

The one-day visit also discussed the welfare and the repatriation of the Nigerian refugees in the member states as well brainstormed on the strength and weaknesses that would be beneficial for the two states.

Spread the love ...let others enjoy this story
Share
Previous Atiku Travels To UK As Wike Rift Lingers
Next Lamido Cracking The Wall Of Unity In PDP, Wike’s Camp Fires Back