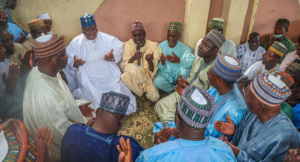 Senate President Ahmad Lawan has urged relevant authorities, particularly the police, to ensure speedy justice for the Islamic Cleric in Yobe State, Sheikh Goni Aisami, who was alleged to have been killed by a soldier on Friday.

Lawan made the appeal on Wednesday while on condolence visit to the family of the late Cleric in Gashua, Yobe State, according to a statement signed by his spokesperson, Ola Awoniyi.

The Senate President and his entourage joined the family members to offer prayers for the repose of the late Sheikh after which he spoke to journalists.
“I’m taking this opportunity to urge the authourities, the Police particularly, to ensure speedy justice for the late Sheikh.

“And I want to at this point commend our people for remaining calm and peaceful and that is what we are known for in this part of the country.

“But I must insist that justice must be done for the murder of our Sheikh.

“The Sheikh was my Special Assistant on Religious Affairs and I worked with him very closely over the years. We pray Almighty Allah to grant him Aljannah Firdaus.

“Killings like this are not normal, are not usual in this part of the country. Here in Yobe North particularly. Therefore, we must do everything possible to arrest this kind of situation.

“When we have to recruit soldiers, police and other security agencies,
we must profile, we must scrutinise to ensure that we don’t recruit people of questionable character, people that have very criminal background. This is very important and very imperative.

“I want to also assure everyone that we will continue to pursue this case until justice is done.

“We in the National Assembly will continue to support the executive arm of government and particularly support our Armed Forces and other security agencies to ensure that they protect life and property of Nigerians.

“The situation may be serious, may be dire but our determination, by the Grace of God, will overwhelm the challenges that we face in the area of security as a country.

“I want to urge Nigerians to continue to be patient with us, to continue to pray for us, those of us in government. We are not going to relent until Nigeria is secured,” Lawan said.