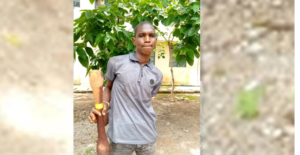 A 25-year-old resident of Ambassador Quarters in Katsina State identified as Najib Shehu has killed his stepmother and broke his father’s leg.

The incident according to the police occurred on August 18, 2022, at about 1600hrs after the culprit had a misunderstanding with the stepmother Asiya Mohammed ‘F’, aged 60yrs of the same address.

The police spokesman SP Gambo Isah in a statement on Thursday said the suspect went into the kitchen, grabbed a pestle, and hit her several times on the head. She sustained head injuries from this and was confirmed dead by a medical doctor.

He added that the suspect had in the spur of the moment also hit his father’s leg several times with the said, leading to many fractures.

To this end, the suspect has been arrested and he also confessed to the commission of the offence. The said pestle has been recovered as an exhibit and an investigation is ongoing.