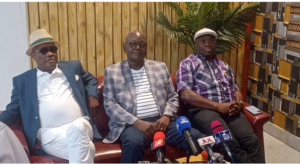 Governor Nyesom Wike of Rivers State says his consultations ahead of the 2023 elections are in the best interest of the nation.

The governor had in the past few days met with top politicians in the country including the All Progressives Congress (APC) presidential candidate, Bola Tinubu; the Peoples Democratic Party (PDP) flagbearer, Atiku Abubakar; his Labour Party (LP) counterpart, Peter Obi and former President Olusegun Obasanjo among others in London, UK.

Wike’s recent moves, following his fallout with the PDP after the presidential primary which he lost to Atiku, have triggered widespread reactions but the governor said his consultations portend good tidings for Nigeria.

“What we are talking about is for the interest of Nigeria and Nigerians. It is not a parochial thing – being centred on a person or group of persons,” the governor said Friday at the VIP Lounge of the Port Harcourt International Airport following his arrival in the country.

“We believe that what is going on will be in the interest of Nigerians at the end of the day. Consultation is still ongoing. Nothing we have said now has been concretised. Discussions are going on.”

Two persons were trapped and three persons rescued after the collapse.
Governors Nyesom Wike, Samuel Ortom, and Okezie Ikpeazu after their arrival in the country from London on Friday, August 26th, 2022.

According to the former minister, nothing can deter his camp from saving Nigeria from some leaders who only want to turn political offices into a family business.

“It is only in this part of the world that you can see that. When we are talking about poverty everywhere? These are people who do not mean well for Nigeria.”

He is, however, optimistic “that with the consultations that are ongoing, it will be a thing of the past”.

“No amount of insults, blackmail can deter us from doing the right thing,” Wike maintained. “So, we are poised for it and there will be no going back.”

The Rivers governor touched down at the airport alongside Governor Samuel Ortom of Benue State, and Governor Okezie Ikpeazu of Abia State who were with him during his London trip.