Atiku to receive Shekarau back to PDP on Sunday — Party Chairman 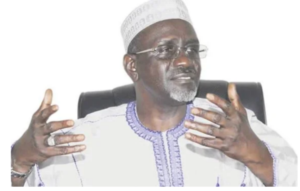 The representative of Kano Central Senatorial District, Ibrahim Shekarau, has concluded plans to return to the Peoples Democratic Party, Daily Trust is reporting.

According to the highly influential and credible newspaper, Shekarau will be received back into the PDP on Sunday (today).

The newspaper said the presidential candidate of the PDP for the 2023 elections, Atiku Abubakar, will perform the ceremony in Kano.

It said this development was confirmed to it by the Kano State Chairman of the PDP, Shehu Wada Sagagi.

The development followed the decision of Shekarau to dump the New Nigeria Peoples Party through which he was collaborating with a former Governor of the state, Rabiu Kwankwaso, to prosecute the 2023 elections.

However, Shekarau fell out with Kwankwaso over the sharing of political offices ahead of the 2023 polls.

The former Governor of Kano State had earlier quit the ruling party in Kano State, the All Progressives Congress, after falling out with the state Governor, Abdullahi Ganduje.

Sagagi told Daily Trust: “Alhamdulillah, finally, we now have a leader in Kano and I am delighted.

“Shekarau, being the highest political office holder as provided by the constitution, has accepted and we have welcomed him back to our dear party, the PDP.

“All arrangements are in top gear in preparation to receive Atiku Abubakar who will be in Kano on Sunday, hopefully to receive Mallam Ibrahim Shekarau.

“We have accepted to follow him and we shall succeed, God willing.”