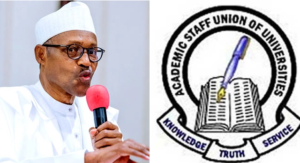 Human rights lawyer, Femi Falana, has called on the Federal Government to sign the renegotiated agreement with the striking members of the Academic Strike Union of University (ASUU).

In a statement on Sunday, the Senior Advocate of Nigeria urged both ASUU leadership and the current administration to resume negotiations in order to end the prolonged strike for the overall good of Nigerian students.

While calling on both sides to resume the negotiations in the interest of the country the Federal Government should be prevailed upon to end the prolonged industrial action.

He accused the Federal Government of resorting to blackmail ASUU, recalling how talks with the union ended in deadlock, a situation that dashed the hopes of many students.

“Instead of engaging in the diversionary tactics of blackmailing ASUU the Federal Government should ensure that the strike is called off by signing the Renegotiated Agreement with ASUU without any further delay,” Falana said.

“While calling on both sides to resume the negotiations in the interest of the country the Federal Government should be prevailed upon to end the prolonged industrial action.”

The rights lawyer is of the view that the Federal Government should commit itself to the faithful implementation of collective agreements reached with ASUU which are enforceable by virtue of the relevant provisions of the Trade Disputes Act instead of embracing the fascist option of prescribing union.

Making reference to the 1992 and 2009 FG/ASUU Agreements, Falana said it was expressly stated that the revenue realised from the sale of the properties of the Federal Government abandoned in Lagos when the Federal Capital was moved to Abuja would be channelled towards the funding of tertiary education in the country.

According to him, the Federal Government has turned around to selling the properties to private individuals and corporate bodies at low giveaway prices.

Some of the properties, he explained, were sold to powerful individuals and corporate bodies including a multinational corporation.

Arguing that a number of the properties have not been sold, Falana wants the Federal Government to turn them over to the universities in line with the terms of the FG/ASUU Collective Agreements.

Spread the love ...let others enjoy this story
Share
Previous TMG accuses FG of appointing APC members as INEC Commissioners, RECs
Next We are living in a country where we look like refugees — SDP Chairman