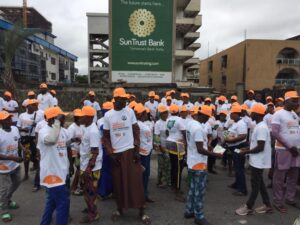 The Social Democratic Party on Friday held a rally in Lagos State to create awareness ahead of the 2023 polls.

The rally, which started from Ojota, ended at Eko Atlantic City, with scores of old and young members participating.

The Chairman of the SDP in Lagos State, Debriel Oluwa Adeyinka, who spoke on behalf of the party’s presidential candidate, Prince Adewole Adebayo, said the party would bring Nigerians hope again with transparency in governance.

She went further to say that the SDP would change the narrative of the system by bringing good governance and presenting to Nigeria the youngest candidate who is a lawyer.

Adeyinka said: “The party’s symbols represent purity, which means transparency, and we would be bringing good governance where government governs the people and not rule the people or oppress the people.

“Government would be accountable to the people on how expenditures are being spent and how resources are being utilised.

“We are living in a country where we look like refugees and if we want this narrative to change.

“We the people must take a stand and a decision to make things right.

“Not by the name of the person or by party platform.

“It should be on the individual.”

Adeyinka said that Nigerians should not sell their votes but should look out for the horse logo as it is the party that represents purity.

She said: “What we are doing differently is kicking against vote buying as Nigerians should get their PVC and not sell their votes.

“Our vote is our power.

“We may not go to the street to protest due to insecurity and all, but our vote would be a bigger voice for us as it is an opportunity to change the narrative of the system.

“Let’s vote right and not vote for recycled politicians nor vote for corrupt governance that uses the resources of the country to oppress the masses that are supposed to be partakers of the benefits of this country.”

Spread the love ...let others enjoy this story
Share
Previous Strike: FG Should Sign Renegotiated Agreement With ASUU Immediately – Falana
Next 2023: I Have No Special Candidate, Only National Agenda – Obasanjo