Akeredolu to teachers: it’s crime to enrol your kids in private schools 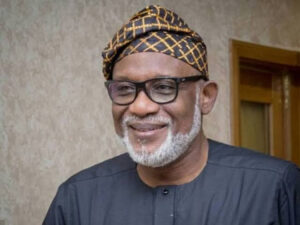 He said it had become an offence for public school teachers to take their children to private schools.

Akeredolu said his administration would not relent in its efforts to upgrade schools’ standard and their personnel.

The governor, who spoke through the Chairman, Ondo State Universal Basic Education Board (SUBEB), Mr. Victor 0labimtan, said teachers would be held responsible for drop in school enrolment.

A statement by the Head, Press and Information Services (SUBEB), Bisi Agboola, said Olabimtan spoke at an interactive meeting with head teachers across the three senatorial districts.

The statement said the government had given UBEC counterpart funding, which was neglected for about five years, paving the way for massive reconstruction and renovation of schools as well as provision of furniture.

It said the governor frowned at the dwindling population of pupils in public schools despite government’s efforts.

The statement said the teachers would be held responsible for any drop in school enrolment.

It added: “Olabimtan called on the education secretaries in the 18 local governments not to hesitate to report any teacher found wanting in his duty post for possible sanction.

“He urged teachers to buckle up and do the needful in the enrolment drive and shun any act of indolence.”

The statement said the state government approved that serving primary school teachers could be elevated to level-16 like their counterparts in the civil service.

It said teachers in the state can be considered for the position of permanent secretary when there is a vacancy.