Wike gets Rivers PDP backing on call for Ayu’s removal 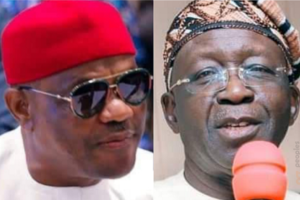 The Peoples Democratic Party (PDP) in Rivers State has vowed to back the position of its leader, Governor Nyesom Wike, that National Chairman Iyorchia Ayu must resign.

There are ongoing talks between the governor’s group and the team of the party’s presidential candidate, Atiku Abubakar, in a bid to end the crisis rocking the party.

State Publicity Secretary, Tambari Sydney Gbara, said it was unfortunate that some party chiefs in the state chose to ignore provisions of the PDP constitution.

He wondered why Senator Lee Maeba was opposed to the call for Ayu to resign.

Describing Wike as the indisputable leader of the party in the state, Gbara said the entire party structure in Rivers was behind the governor.

He said: “Governor Wike is the leader of PDP in Rivers State. Therefore, where he stands, is where we stand as a party.”

He insisted that the call for Ayu’s resignation was in tandem with the provisions of the PDP’s constitution, which frowns at a particular section of the country producing both the national chairman and presidential candidate of the party.

He said: “In 2007 and 2008, when President Musa Yar’Adua emerged as the standard bearer of the PDP at the national level, Col. Ahmadu Ali (retd) who was the national chairman then, had to resign.

“A mini-convention was immediately convoked that brought Prince Vincent Ogbulafar from the South, to balance up. Therefore, why should it be different now?”

Gbara said the decisions of many leaders of the All Progressives Congress (APC) to dump their party and former Minister of Transport, Rotimi Amaechi, had further provided eloquent testimonies of Wike’s leadership qualities.

He named some of the opposition leaders that recently pitched tents with the PDP as Sam Sam Jaja, Chris Finebone, George Tolofari, Adoye Wilcox, Princewill Dike, among others.

He said the current disagreements were expected from any party in transition, insisting that it had not affected the consolidation of PDP in the state.

He said: “Nobody sees something good and will not want to identify with it. The truth is that our leader, the executive governor has done so well that people are being attracted to the party.

“They have seen the extent to which he had developed the state as a second term governor. He is not just inaugurating projects, he is still flagging off projects.

“It is something amazing. That is why we see people who were the pillars of opposition party coming to the PDP.

“The next election is a complete walkover for PDP in Rivers. But we are not sleeping. We are putting our house together to start our campaigns after the PVC collection rally. We will work very hard to reach the nooks and crannies of the state and preach the gospel of PDP.

“Governor Wike has given us a lot of things to talk about and campaign with. We will keep consolidating at the grassroots to retain Rivers State.

“People should join the winning team. They should be part of the good things happening in Rivers. PDP members should be steadfast and continue to support Wike.

“There is no crisis in the party. It is a transition period and you see things like this happening.

“But as a party and a family we already know that at this time certain persons who might be disgruntled will express themselves, but it is nowhere affecting the consolidation of PDP in the state. We are on ground and united as a party.”