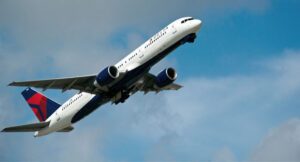 Delta Airlines has announced the suspension of its New York-Lagos direct flights.

The airline headquartered in Atlanta, Georgia, in a statement said its decision is to fit the current demand environment, adding that it will continue to operate its Lagos and Atlanta.

The statement read, “Delta is suspending its nonstop service between New York-JFK and Lagos to fit the current demand environment.

“The airline continues to operate service between Lagos and Atlanta and offers connections to New York and other cities across the United States.

“Customers impacted by our suspended New York-JFK to Lagos service will be reaccommodated on Delta-operated flights or services operated by our joint venture partners. Delta remains committed to the Nigeria market.”

Channels Television had reported that Dubai’s Emirates Airline in mid-August suspended its flights to Nigeria over an inability to repatriate funds to the tune of $85m.

The International Air Transport Association earlier in June said the Nigerian Government was withholding $450m that foreign carriers operating in the country had earned.

The Central Bank of Nigeria last Friday announced the release of $265m to foreign airlines whilst the Association of Foreign Airlines and Representatives in Nigeria urged the apex bank to release the trapped funds in time.