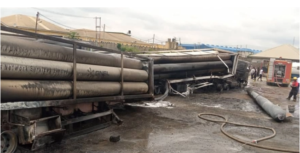 A gas plant has exploded near the international headquarters of the Redeemed Christian Church of God (RCCG) in the Obafemi Owode Local Government Area of Ogun State.

The explosion sent residents into panic mode in the Mowe area. Though the gas plant is not owned by RCCG, it was situated close to the Redemption Camp.

The spokesman for the Lagos State Emergency Management Agency (LASEMA), Nosa Okunbor, confirmed the explosion in a chat with Channels Television on Monday afternoon.

“The gas explosion occurred just before Redeemed main entrance. Incidentally, the thing is not owned by Redeemed but it is just by it, “Okunbor said. “It is by a filling station in a densely populated area.”

In an update obtained from LASEMA, the agency said the fire started from one of the cylinders before it escalated to the two other stationed trucks. It said the trucks and the affected cylinders were dampened to prevent the likelihood of a secondary incident. LASEMA also noted that there was no loss of life or injury recorded.

First responders at the scene include the Lagos State Fire Service and the Federal Fire Service.

Also, a statement by the Director of the Lagos State Fire and Rescue Service, Adeseye Margaret, identified the explosion site as Sun Contractor Project Services Limited.

“The fire which was reported at 11:22 hours, Monday, was subdued from causing a secondary incident by the Alausa and Ilupeju fire crews, leaving four stationed gas trucks severely burnt,” the statement partly read.

“There was neither a case of injury nor death as damping down of the fire has been concluded. The cause of the fire is unknown at the time of this report as a preliminary investigation is ongoing and will be made public.”