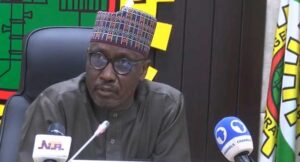 Speaking during the 49th session of the weekly ministerial briefly at the State House in Abuja, NNPC Group Chief Executive Officer, Mele Kyari maintained that the menace involves every member of the society.

He stated that wherever the stolen product is found mostly in churches and mosques, there has been a network of vandals working in collaboration.

“That means that everybody is involved. There is no way you will take products, bring them in trucks in populated neighborhoods, load them, and leave without everybody else knowing about it. Everybody includes members of the community, members of the religious leaders and also and most likely government officials of all natures, including security agencies personnel.

“They are everywhere. And I’ve seen this even in the Niger Delta. There’s no way you would deliver a volume and lose up to 30 percent and you will continue to put those products in this line.”

For this reason, the NNPC boss disclosed that the entire network of pipelines for petroleum products distribution in the country has been shut down, as a result of the activities of vandals.

To further address the menace, the Group CEO announced that a national reserve company will be established to manage the pipelines on a commercial basis to efficiently put them to use for the distribution of products across the country.

According to him, crude oil theft which has resulted in the discovery of 295 illegal connections making it difficult for oil companies to operate efficiently has been very difficult to manage but they are not helpless.

He guaranteed that fully embracing the gas infrastructure will resolve the nation’s energy poverty.