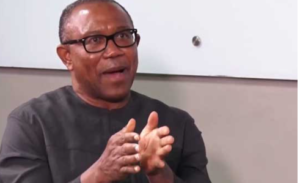 Labour Party’s presidential candidate, Peter Obi, has described as unacceptable, the prolonged strike by the Academic Staff Union of Universities, saying the Federal Government must immediately engage in “collaborative negotiations” with the aggrieved lecturers of public universities.

In a string of tweets released Wednesday on his verified Twitter handle, Obi, a former governor of Anambra State, lamented that the industrial action which commenced on February 14, 2022, has become almost intractable to the disadvantage of Nigerian students.

Obi tweeted, “Our position is that the ASUU strike has lingered for far too long. It is unconscionable, worrisome and unacceptable that FGN would allow such an industrial action to become almost intractable to the detriment of our students.

“It’s time for FGN to engage in collaborative negotiations with ASUU, and in good faith.”

SUU President, Emmanuel Osodeke, said in a statement on Monday that the National Executive Council of the union in Abuja “resolved to transmute the roll-over strike to a comprehensive, total and indefinite strike action beginning from 12.01 am on Monday, 29th August 2022.”

Osodeke said the union has endured a “lot of deceit of the highest level in the last five and half years as the Federal Government of Nigeria engaged ASUU in fruitless and unending negotiation without a display of utmost fidelity”.

ASUU embarked on strike on February 14, 2022, over a number of issues including the non-payment of Revitalization Fund and Earned Academic Allowances as well as the non-adoption of the University Transparency and Accountability Solution over the Integrated Payroll and Personnel Information System.

The Federal Government had on Tuesday summoned a meeting with Vice Chancellors and Pro-Chancellors for September 6, 2022, at the National Universities Commission in Abuja to resolve the crisis.

Meanwhile, the National Association of Nigerian Students on Wednesday urged state-owned universities to resume academic activities, describing the “total and indefinite strike” declared by ASUU as “unpatriotic and wicked”.