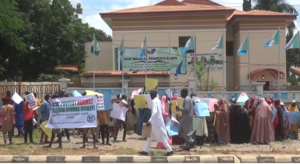 A coalition of youth support groups within the New Nigeria Peoples Party (NNPP) in Kaduna state has called on the party’s national leadership to immediately replace the state’s Governorship candidate, Senator Suleiman Hunkuyi for alleged anti-party activities and high handedness.

Members of the coalition who staged a peaceful protest against the former Senator on Tuesday, accused him of secretly working for the success of the All Progressive Congress in the state and has also traded his candidacy to the ruling party ahead of the 2023 elections.

The aggrieved NNPP Youth who took their protest to the party’s secretariat in the Kaduna state capital, insisted that the party must replace Senator Hunkuyi with a better and uncompromising governorship candidate if the party must win the election in 2023 .

They said the replacement should be done immediately using the substitution window given by the Independent National Electoral Commission (INEC).

The chairman of the group, Abdullahi Adamu who addressed journalists, said rather than being a unifier of the other candidates for the various positions, Senator Hunkuyi has used his position to destroy the NNPP in Kaduna state for his selfish interest.

Receiving the protesters, the Kaduna state NNPP chairman, Ben Kure assured them that their grievances will be looked into with a view to addressing them

But in a swift reaction, the NNPP Governorship Candidate denied the allegations levelled against him by the group, saying that the claim is borne out of mischief and ignorance of the internal workings of the party.

Spread the love ...let others enjoy this story
Share
Previous Insecurity: Stakeholders Call For Speedy Passage Of Local Govt Autonomy Bill
Next 2023 Elections Will be Free Of Intimidation – Buhari